Enoch Jones, the son of KPA’s Dr. Paul Jones (Farragut office), has an interesting form of exercise…he’s a Ninja.  Enoch, now 9, tried multiple team sports as a young child but never found one that he liked. He was always distracted and bored. From the time he could walk, he loved being outside running and jumping and climbing. He especially loved climbing trees and jumping over the big red balls outside Target. His dad called him a free runner. Free running is actually a sport, formally called Parkour. Enoch also loved to watch the TV show American Ninja Warrior. Enoch’s mother searched for a sport he could try that would keep him occupied and focus some of his energy.  While searching the internet, she found Summit Sports in Lenoir City, which taught a fitness class for kids using obstacles.  She took him to a class and he was hooked!

After a year of taking obstacle course classes, Enoch heard that American Ninja Warrior was going to expand to include a kids version of the show. His coach encouraged him to apply for the show and so he did!  He had to answer lots of questions and send in lots of audition video. Eventually, he was selected from more than 6000 kids to appear on the show in its first season. He traveled to Los Angeles last July to film the show. It was fun and exciting but it was hard work too.

This is proof that there’s a sport/exercise for everyone. You just have to find the one that is fun and is right for you!

Enoch’s episode airs this Saturday, March 9, at 7:00 pm on the Universal Kids Network. 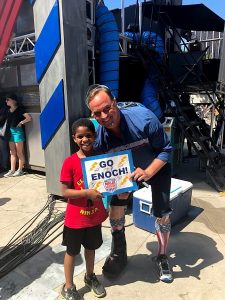 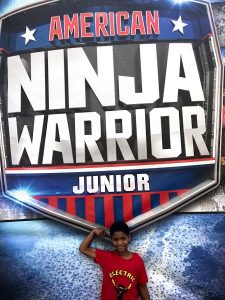