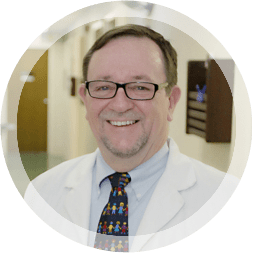 Dr. Swabe has been with KPA since 1991. He was employed by Southeastern Emergency Physicians in Knoxville and worked at UT Hospital's ER from 1991-1994. He also practiced at Oak Ridge Pediatric Clinic in Oak Ridge from 1989-1990. From 1986-1989, he practiced at Rogersville Medical Clinic in Rogersville, TN.

Dr. Swabe earned his bachelor’s degree from the University of Tennessee in 1977 and his Medical degree from East Tennessee State University, James H. Quillen College of Medicine in 1982. His internship and residency were completed at Greenville Hospital System, Greenville, SC.

Dr. Swabe is certified by the American Board of Pediatrics

Dr. Swabe is an American Academy of Pediatrics Fellow.

Dr. Swabe is married, has five children, and is the proud grandfather of nine grandchildren. He enjoys woodworking, boating, hiking and spending time with family.